We Could Sell This Biodegradable Poly Mailer

WE COULD SELL THIS BIODEGRADABLE POLY MAILER

If our goal was to maximize profits, we would sell compostable poly mailers. EcoEnclose’s goal, however, is to make eCommerce a positive force for the environment by offering the world’s most sustainable packaging solutions.

We prioritize sustainability over sales, so we've decided not to offer compostable mailers as our research has shown them to be much less eco-friendly than our existing options 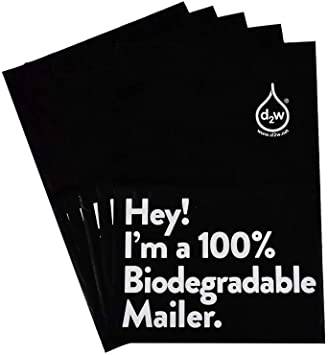 What Are Compostable, Biodegradable Poly Mailers?

Many packaging companies now offer compostable, biodegradable poly mailers. These mailers are made with a combination of corn-based PLA bioplastic and fossil-fuel based PBAT. Some of them have passed ASTM standards for compostability and some have secured BPI compostable certification.

We Could Sell These Biodegradable Poly Mailers Tomorrow.

These mailers are largely manufactured in China and can be purchased readily through a marketplace like Alibaba.

Every few weeks, EcoEnclose receives a sales email like this one from a Chinese manufacturer of compostable mailers.

And a quick search through Alibaba reveals a myriad of compostable poly mailer options.

I can’t lie, it's tempting to just go for it.

We know a lot of ecommerce brands are searching for bioplastic bags, and would make the switch to EcoEnclose quickly if we started offering this option - across our team, we respond to inquiries about these mailers many times per week. Since they’re manufactured in China with subsidized inputs, they can also be sold at a lower price point than our domestically-made, recycled-content poly mailers.

When I put my pure business hat on, it is really hard to say no. I get antsy to order them so we can begin selling them in a few weeks. But then, my eco hat takes over and I remember what EcoEnclose is in business for and what I am passionate about - the planet.

With that in mind, the decision to say no becomes obvious. It becomes obvious that we should skip the easy pathway to a rapid, short-lived profit from degenerative sources, and instead focus EcoEnclose on developing innovative products that live up to our ideals of circularity. This type of innovation and ecological progress requires in-depth partnerships with reclaimers, manufacturers and technology developers.

Virgin Inputs
As EcoEnclose works towards a future of packaging circularity, we prioritize recycled content, and post-consumer waste in particular, over any virgin materials. If recycled content can be used, we believe strongly that it should, and that seeking virgin input instead is a misguided and unnecessary use of resources.
Read More:
Why Recycled Content Matters
Corn & PLA
Corn is not just any virgin material. We see it as a particularly degenerative material that is a terrible way to make plastic. In fact, we have tried to replace fossil fuels with corn before, with corn ethanol, a strategy which has had a net negative impact on the planet.
Read More:

PBAT Fossil Fuels
PBAT is a petroleum-based plastic that acts as a binder. This PBAT is a critical input into these mailers. PLA is extremely slow to biodegrade outside of a tightly controlled environment, but PBAT biodegrades rapidly and allows the mailer to be home compostable.

The Problem with Corn

Land Conversion Ruins Biodiversity and Emits Greenhouse Gases: In 2013, it was documented that 23 million acres of US grassland, shrub land and wetland were destroyed to support ethanol production. This conversion emitted millions of tons of greenhouse gases into the environment. It has been suggested that the use of "PLA for poly mailers makes up barely 0.05% of annual global corn crop," conveying the sense that we “should not worry” about land conversion issues when it comes to PLA. This way of thinking is immensely misleading.

Compostable mailers' low impact today is driven by the fact that PLA/PBAT mailers are still such a tiny fraction of the global mailer and plastic supply. To be truly thoughtful about this question, we need to consider - what happens if PLA mailers become commonplace? It takes about 2.65 lbs of corn to make a pound of PLA (a broader range of 2.5-2.8 lbs corn to 1 lb plastic was shared via a phone call to Kansas State University Extension). If we converted all of our plastic to PLA, we would need to double the world's corn production.

Corn Production Is Largely Fueled By Petroleum: Growing and harvesting corn for ethanol takes a lot of energy - farm machinery, fertilizers, energy required to convert corn into ethanol, transportation, etc. Studies have shown that 74-95% of the energy content in corn ethanol comes from fossil fuels. In other words, there is only a 5-26% renewable energy “profit.”

Corn Results in Excessive Nitrogen and Phosphorus Runoff: The EPA has stated that, “nutrient pollution is one of America’s most widespread, costly and challenging environmental problems, and is caused by excess nitrogen and phosphorus in the air and water” and is driven largely by chemical fertilizers used on industrial crops, manures and discharges from wastewater treatment facilities.

The Ethics and Impact of Growing Crops for Non-Food Uses: In 2000, ethanol represented 6 percent of our corn production. In 2013, it represented 40 percent. This is an astonishing amount of crop production getting diverted away from food for animal or human consumption. Because the United States is the world’s top corn producer, this shift has also disrupted global markets for corn and other agricultural commodities. National Research Council studies suggest that the ethanol mandate raised commodity prices by 20 to 40% from 2007 to 2009. This resulted in farmers seeking more land for production, resulting in millions of acres of land-use change.

Consolidating Power Among Seed Producers: Genetically engineered corn allows chemical companies such as ConAgra and Monsanto to further control our land, our public policy, our soil, and our agricultural economy

2. End of Life: Not Circular, Not Enriching

They Are Not Recyclable
As we build towards a circular packaging economy, we are focused on designing non-food packaging for recyclability.
This is the preferred end of life scenario for any unsoiled packaging, based on the hierarchy developed and adopted by NGOs, government agencies and waste management organizations worldwide.
Recycling ensures that the raw resources that went into the development of the original package are used again (which avoids the need for new virgin inputs and ensures packaging does not waste away in a landfill).
Compostable mailers are non-recyclable, and also often create contamination in recycling streams, when well-meaning individuals drop them in curbside or thin film bins instead of composting or landfilling them.
Read More:
Hierarchy of Waste
They Degrade and Devalue Compost
Even when these biodegradable poly mailers are properly composted (which does not typically happen), they do not benefit the soil in any way.
Packaging introduces inks and adhesives that (even when they are certified compostable) bring toxins and chemicals into compost. Bioplastic packaging offers no nutrients to compost and instead makes the output wetter, more difficult to manage, & more difficult to sell, which in turns makes these operations harder and less economically -viable to run. For these, and a variety of other reasons, Oregon’s composting facilities actually stopped accepting bioplastic packaging.
Let’s save composting for organic waste - food waste, yard debris, grass clippings: items that are nutrient-rich and will contribute to healthier and more biodiverse soil.
Read More:
Composters Don't Want Your Packaging. Especially Your Bioplastic.
They Will Almost Always Be Landfilled
We reviewed the services across most US cities and found that municipal curbside composting is still surprisingly limited. This aligns with BioCycle's research that only 4% of US households (5.1 million households) are served by a regular, curbside compost service.
I also dug deeper in the list of “accepted items” by curbside and drop off compost services in the 20 most populated American cities and found that only four list certified compostable plastic and plastic-coated paper food packaging (such as Ingeo cutlery and EcoProducts hot cups) as Accepted items. Only two would accept compostable poly mailers, and only if they are clearly labeled with BPI certification.
The vast majority of compostable mailers will be landfilled. And even worse, a lot of consumers believe that they should be landfilled because they have been incorrectly given the message that these poly mailers will biodegrade rapidly in a landfill.

No detailed research has been conducted comparing the carbon emissions of 100% recycled plastic film with PLA/PBAT blend.
However, the most heavily referenced study on this topic is titled, "Carbon Footprint of Packaging Films Made from LDPE, PLA, and PLA/PBAT Blends in South Korea" and takes quite a thorough look at this question, analyzing multiple scenarios. This study shows that virgin LDPE has a lower carbon impact than PLA/PBAT blends. These conclusions do not even consider the impact of 100% recycled plastic which tends to lower the carbon footprint of plastic by 30-70% nor other environmental harms of corn production.

4. They Do Not Address Ocean Pollution

Compostable, biodegradable poly mailers have not been tested for biodegradability in a marine environment, and none have passed ASTM D6691 standards. If a company is seeking compostable shipping solutions so you can ensure your packaging does not contribute to ocean plastic pollution, it is important to know that a PLA + PBAT mailer is not your answer unless it has passed marine biodegradability testing and received a relevant certification.

What Eco-Friendly Mailers Should I Use?

The Pros of Paper

The Pros of Poly

If 100% recycled paper mailers will functionally work for your products and the price point works for you, they are great eco-friendly packaging solutions that better embody circularity than poly solutions.

However, if 100% recycled paper mailers do not work for you and your business, you can feel confident in using 100% recycled poly mailers as a sustainable packaging choice.