China's Recycling Ban Impact and 6 Ways You Can Help

A question we’re hearing a lot recently...what happens to recycled poly mailers now that China isn’t taking our plastic? It’s a great question and we love hearing it because it reinforces just how thoughtful and well informed a community we get to work with.

The China Recycling Ban has heavily and directly influenced recycling across the country. It has had the most dramatic impact on (1) West Coast operations where recyclers were most relying on China to buy their bales of material and (2) single stream (what your curbside recycling program probably is) recycling, which often looks for buyers who have lax contamination standards.

Plastic film - including  poly mailers - should be recycled via the grocery drop off program. Unlike single stream / curbside recycling, this program is a “pre-sorted” recycling stream. Though these streams have been negatively impacted by the ban, the impact is far less than plastic, glass and mixed paper coming out of single stream recycling programs. Additionally, operations that have been affected are positioned to recover faster and more successfully than single stream operations.

Additionally, the China Recycling Ban is actually an awesome step forward. Though its short term impact is very tough on the US, we believe it represents a tremendous opportunity for the recycling industry (and the planet and its oceans) to step up and develop a stronger, more sustainable recycling supply chain.

Background on the China Recycling Ban

Anyone interested in sustainability and a zero waste lifestyle is likely familiar with the Chinese National Sword, often referred to as the China Recycling Ban. The policy came into effect in February 2018 and bans imports of 24 types of waste material and sets extremely high standards for contamination levels in others. The ban has had a wide sweeping (and, at least in the short-term, devastating) impact on the recycling supply chain in the US and nations worldwide, especially as other countries like India have followed China’s lead.

The China Recycling Ban is not a bad thing. Actually, I think it is a GOOD thing environmentally speaking.

To learn why, let’s take a brief detour of history.

The US’s highly automated single stream recycling system and China’s explosive industrial growth go hand in hand. When China joined the WTO in 2001 they began heavily exporting their goods.. This made it a no brainer for them to take in the world’s (and especially the US’s) recycled materials. Ships carrying Chinese-made goods were otherwise going back empty and China needed raw materials for all they were manufacturing. Additionally, because of the cost of labor in China, their manufacturers had the ability to deal with “contaminated” recycled bales in economically viable ways. This meant that they welcomed the outputs from our single stream recycling chain that in-country reclaimers would reject.

In single stream recycling, all recycled items are mixed together and then go to a MRF (Materials Recovery Facility), where they are sorted by machines and humans, into bales of like-material. If you haven’t toured a MRF -- you should! Check out this  video of a MRFto get a good overview of what happens.

MRFs deal with a lot of challenges due to households recycling incorrectly and the general complexity of materials (especially packaging)! They see and have to sort out everything from well intentioned recycling mistakes consumers make (like unrecyclable bio-plastic or energy bar wrappers) to egregious recycling behavior (animal carcasses and bowling balls).

Bales coming out of MRFs almost always have some level of contamination, whether it's staples in stacks of paper, food residue, paper milk jugs with plastic lining, and plastic tape on paper boxes.

The exceptional MRFs have very low contamination but some have really high rates. Picture bales of mixed paper with magazines that are wrapped in plastic film, or bales of traditional plastic with bioplastic mixed in, or even bales of paper with heavy glass or a bowling ball inside to add weight to the overall bale (so the MRF can increase their revenue).

Historically, China has been willing to accept high levels of contamination in their bales because (1) they had people and a labor cost structure to manually sort through all of this and (2) there were fewer regulations and oversight around the disposal of unusable recycled materials than countries like the US have. China became the leading buyer of recycled product coming out of the US, including plastic, glass and mixed paper.

In 2016, the documentary Plastic China was released and highlighted the tragedies associated with China’s recycling industry. 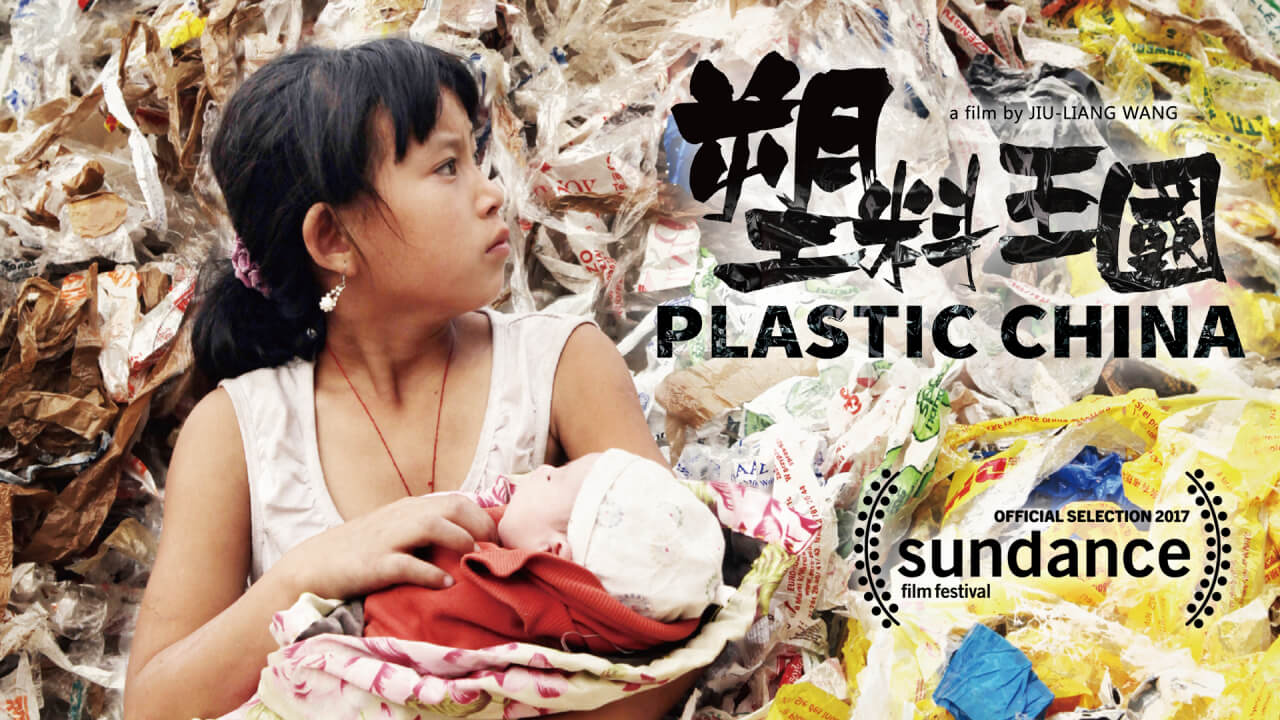 The film followed an owner of a Chinese recycling facility and a worker at this plant, and painted a jarring picture of how China’s open door recycling has impacted communities and waterways. The film shows workers manually cutting up plastic, melting, soaking it and turning it into sludge and then pellets - creating terrible work and health conditions. It illustrated how inadequate disposal of unusable recycled materials led communities to have access to only grey plastic-polluted water and fish whose insides were consumed by plastic. 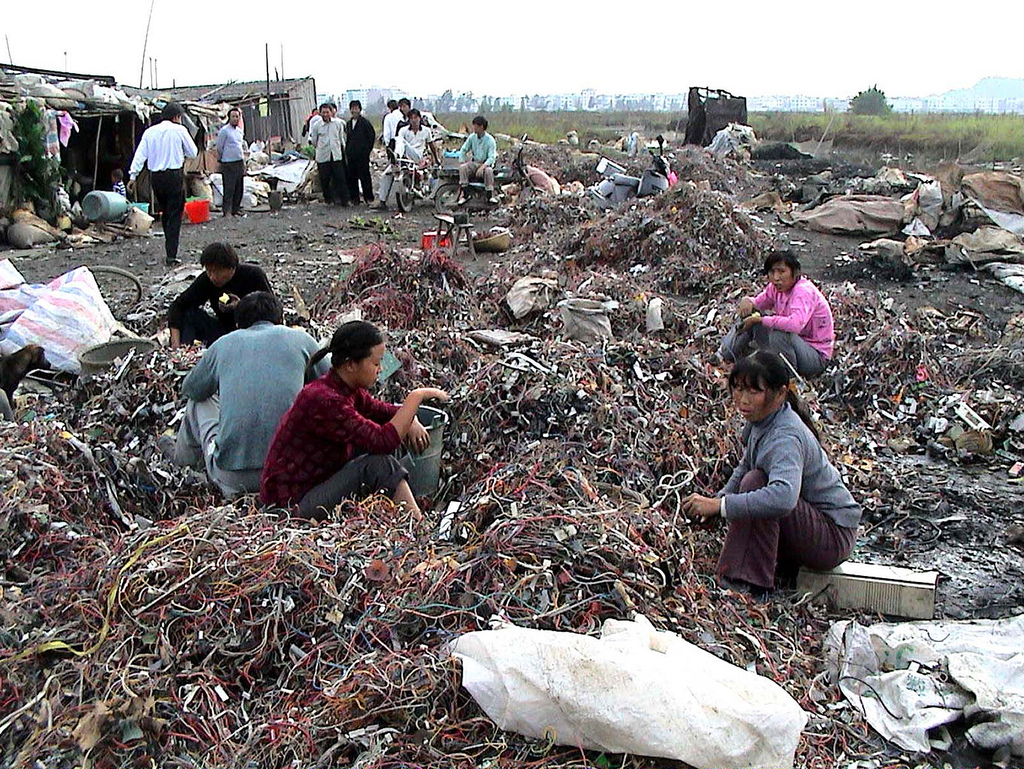 In 2017, National Sword was introduced, and China has been steadily banning new categories of foreign recycled scrap ever since.

The grocery store blue bin system for plastic bags and other thin film is an example of pre-sorted recycling that was developed by the  American Chemistry Council’s Flexible Film Recycling Group, likely in response to the important pushback they were seeing against grocery store plastic bags.

Contrary to popular belief, almost all plastic bags and other thin film plastic ARE recyclable (i.e. they can be made into new plastic). However, unlike hard plastics, plastic film is not typically accepted by municipal curbside recyclers because the bags get caught into the gears of the sorting equipment, causing extremely costly shutdowns and maintenance. Thus, the FFRG developed a dedicated recycling process for plastic bags and other thin film plastic, by working with retailers as collection agencies and reclaimers and manufacturers who would purchase this poly film scrap to regrind it new products.

The majority of major grocery and superstore retailers participate as collection spots for plastic film, including Target, Walmart, Whole Foods, Krogers and Albertsons. It is critical that this plastic film is clean and dry (curbside recycling facilities do not have stringent requirements like this). Ideally, bags are also freed of any paper based labels. This ensures that the pre-sorted stream of plastic film is as valuable and usable as possible. 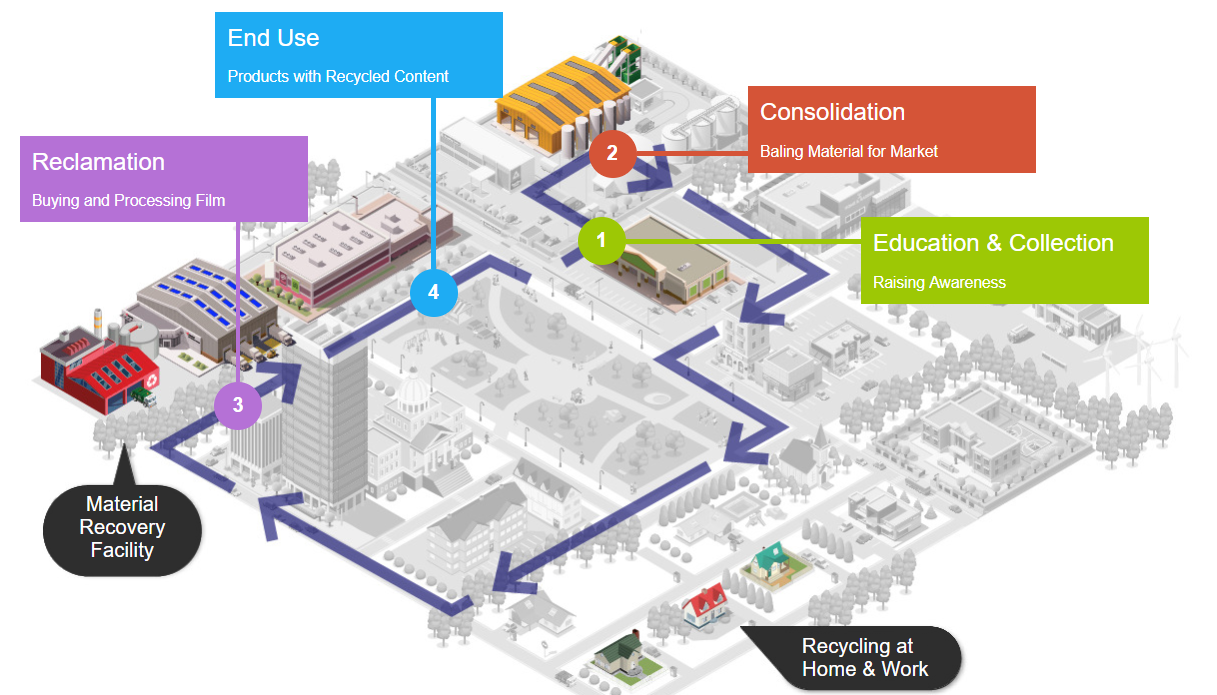 Denton Plastics and Merlin Plastics are two examples of the many reclaimers that will accept this recycled plastic and push it through equipment that first checks it to ensure there are no metallic elements in the stream and then regrinds it into pellets.

Companies like TREX serve as a reclaimer, manufacturer and brand, as their facility accepts recycled plastic film from retailers, regrinds it, and uses it as inputs in their beautiful, high end composite lumber for decking.

Many people believe that plastic and plastic film in particular can only be recycled once. This is untrue. In fact, plastic can be recycled 7-9 times before its quality degrades to a point that it is difficult for manufacturers to use (paper, in comparison, can be recycled 4-6 times). However, because the process of collecting, reclaiming, regrinding and manufacturing with recycled plastic can be more costly than using virgin petroleum for plastic, the scrap has historically been used for more durable items (i.e. TREX lumber versus plastic packaging) that can generate enough revenue to make the recycling process cost effective.

China became an absolutely essential buyer of single stream, MRF-sorted bales of recycled material because of the need to have people employed to strip and separate this material to make it usable for manufacturing. However, many source separated recycling streams have relied less on the labor advantages of the Chinese recycling market, and have generated more in-country markets than single stream has.

The US generates 66 millions tons of recycled material annually. Prior to the National Sword, one-third of this was exported, of which the majority went to China.

Now, China’s recycling imports of plastic and mixed paper are down 90%. Other countries, such as Vietnam and Malaysia, have begun to accept more and more recycled imports; however, they are also reaching the limits of their capacity, and some of these countries are fraught with their own poor waste management systems. Additionally, some countries - such as India - have implemented their own limits on imports of recycled scrap.

So, total exports of recycled plastic and mixed paper are down 40% compared to 2016.

As this resource shows, some MRFs are losing revenue and staying afloat through public dollars, which are bound to run out soon. Some are experiencing high rejection rates on bales. Some are seeing drastic reductions in the price they can get for bales of recycled material. Some municipalities and reclaimers are stockpiling materials that they can’t find profitable markets for, in hopes that some open up soon. And when storage space to stockpile runs out, they often have to send bales of technically recyclable material to the landfill.

Some operations are banning certain materials from being recycled altogether, a step that does not go over well with communities. And some waste management are increasing their prices to account for these challenges and the fact that they need to staff up to drastically reduce their contamination rates. Sadly, some recycling programs have shut down altogether.

Most people see plastic as the main issue, but in fact glass and mixed paper (i.e. essentially all paper that is neither corrugated nor newspapers) are also seeing challenges and are getting banned.

These issues are most affecting MRFs with relatively high contamination rates. MRFs that have invested in cutting edge technology for automated and accurate sorting, and that have staffed up properly to manually sort things that automated machines miss, have much lower contamination rates and have therefore weathered the ban more successfully. Additionally, West Coast MRFs are impacted much more than those across the rest of the country, because of how seamless it used to be to send their items to China on ships already at their ports.

Many pre-sorted recycling streams, on the other hand, are faring well overall. This is especially true for plastic film, which doesn’t need intensive hand sorting (the way other single stream issues like waste streams such as Christmas lights have) and whose recycling supply chain was developed by the American Chemistry Council so there are a committed set of direct, ready buyers for clean, properly recycled plastic film.

On the West Coast, and the Pacific Northwest in particular, some plastic film collectors are stockpiling material waiting for policy changes in China, new international markets, or more North American outlets for the scrap. However, elsewhere across the country, reclaimers can’t find enough supply of post consumer recycled plastic film to meet the demand they are seeing. In fact, as we work to increase the percent of post-consumer waste in our 100% recycled poly mailers, one of our main challenges is that the supply of recycled plastic film just was not high or consistent enough.

Opportunities the China Recycling Ban Presents: 4 Hopes and 6 Steps You Can Take

The China Recycling Ban is a huge waste management issue and the short term effects are depressing - recyclers shutting down, recyclable product ending up in the landfill, and recycled scrap flooding other developing markets who aren’t necessarily capable of handling this volume of material.

But it is critical that consumers don’t turn their backs on recycling, whose very concept is essential to sustainability: once produced, materials should be used and reused as many times as possible before they are landfilled or, ideally, composted. Recycling must come after source reduction and reuse; however, as long as new things are being produced, recycling must remain a third and critical “R.”

Instead, we could welcome the ban as an opportunity to the entire industry to rethink and drastically improve recycling in our country.

Here, we share four hopes for recycling long-term and six steps you can take in your household or business to support forward progress.