Raise your hand if you've ever accidentally eaten the little produce sticker on an apple?! I've informally polled my friends and every single one of them has had a PLU sticker, or product lookup sticker, in their stomach. The internet is awash with false claims about those PLU stickers so we wanted to set the record straight on a few things that people often ask.

No, produce stickers are NOT biodegradable. These stickers are typically made with a thin layer of plastic, most commonly vinyl (though occasionally paper is used). Plastic is functionally important because it means the stickers can better withstand water, sprays, transit and packaging as it moves from the producer to the shipper to the retailer.

But the use of vinyl and other thin plastic films means these stickers do not compost or biodegrade and you should remove the sticker before composting. 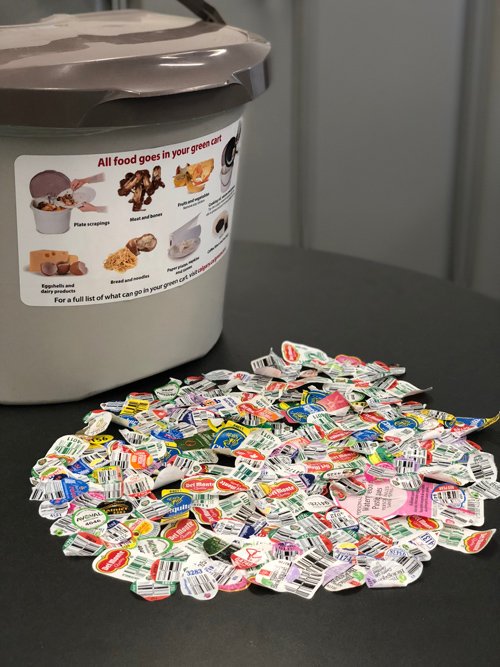 Unfortunately, people often don't know this (or forget!) - especially when the sticker is on the peel, as it is with citrus, avocados and bananas.

Industrial composting facilities are happy to get our food waste, but are really struggling with the PLU sticker contamination issue. Screening out these stickers is time consuming and challenging. Because of how tiny, thin and pliable they are, stickers will often get through the screens designed to catch them - leaving a sticky, plastic mess in the resulting compost.

According to Modern Farmer,  some companies single them out as the worst contaminant they deal with. It is somewhat alarming to think about how much of this plastic is likely ending up in our soils through the composting process.

Unfortunately, PLU stickers also often end up as litter. Kids peel them off of apples and toss them to the ground. Or they get stuck to clothes and shoes and eventually end up outside. Once they become litter they will contaminate our waterways and lands forever (until, depressingly, they are ingested by marine life).

Luckily, if you’re left wondering what to do with produce stickers, the answer is is actually pretty simple.

First, peel off all of the PLU stickers as soon as you bring your groceries home, before you put produce into your fridge or bin. Then, make sure every single sticker ends up in the landfill-bound garbage. Looking for an alternative to trashing these stickers?

Some have taken to collecting them or creating art with them, which is pretty cool and creative! 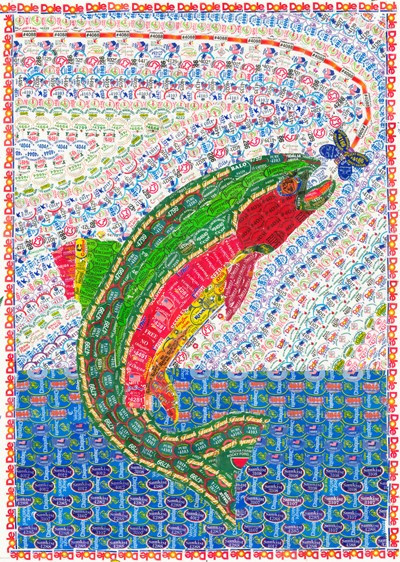 Let’s get this out of the way- don’t eat produce stickers. Once you learn that these stickers are typically made of plastic, I imagine you aren't inclined to want to eat them anyway, but it’s worth mentioning.

Because the internet has many claims that PLU stickers are made with "edible paper," however, it is important to emphasize this again: avoid ingesting produce stickers.

If you accidentally ingest a sticker on an apple, don't panic. It will go through your body just fine, just like chewing gum (which is also made of plastic). But don't make it a habit of eating fruit stickers just because you can.

Where did the myth that these stickers are edible come from? PLU stickers are "FDA compliant" but that does not make them edible. FDA compliant means a material is safe for direct food contact and that once the food and material are separated, there won't be any residue from the material left on the food that could harm you. Sometimes referred to as "food contact substances (FCS)", this type of material is typically used to manufacturing, package, transport or store food.

Households nationwide use plastic wrap or baggies to store food, but they know not to actually eat the plastic wrap. This is the same thing!

What Does the 4 Digit Code on Fruit Stickers Mean?

If they’re so bad for composting, why do they put stickers on apples anyway? PLU stands for "Produce Look Up", so the sticker is actually telling each entity in the supply chain exactly what produce item it is. The International Federation of Produce Standards (IFPS) creates and manages this list, which currently has more than 1400 different codes on it. There is a unique PLU code for each specific variety of a produce item. An organically grown Fuji Apple has a distinct code from a conventionally grown Honeycrisp apple.

Obviously it doesn't make sense for an individual to learn all of these different codes. But if you know a few different tricks, PLU codes can help you as much as they are helping your checkout clerk. The three most important distinctions are:

PLU stickers are not the devil. PLU Stickers are Chock Full Of Information in our Global Produce Supply Chain. In fact, it is somewhat mind-blowing to think about how much essential information is captured on such a tiny little sticker, and that producers and shippers worldwide follow the same standards. 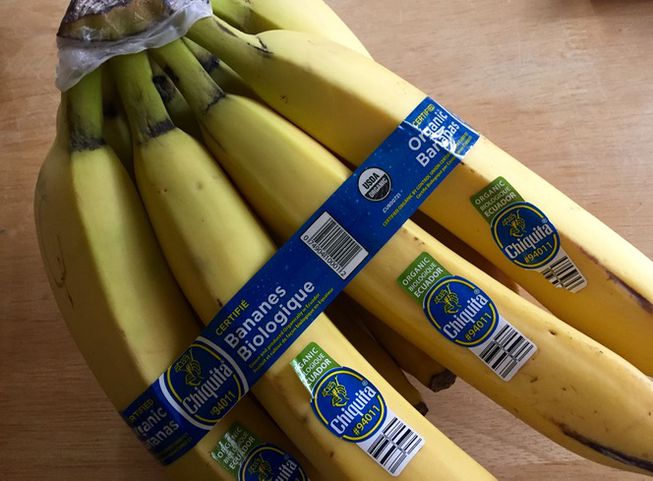 What Should You Do with Produce Stickers?

We should all take steps to reduce the amount of trash that’s sent to landfills and recycle wherever possible, but in the case of produce stickers it’s best to take them off your fruit right away and send them to the landfill in the trash(for now). While many eco-conscious consumers are opting for a more locally focused food lifestyle, the farmers market isn't a viable option for many of us all year round. A global supply of produce means that PLU codes and produce stickers are likely here to stay (and of tremendous benefit to retailers and consumers).

But the challenges these stickers are posing for home and industrial composters is a signal that as households, communities and countries are rethinking waste management and landfill diversion, we also need to redesign labels and packaging to align with the best possible end of life scenario for each item. In other words, we need to design more thoughtfully for end of life

For EcoEnclose, this has always meant designing for recyclability, given that recycling is the most sustainable end of life scenario for non-food packaging.

The best end of life scenario for produce (and all food) is composting. So any item placed on food should be designed for compostability. There are some biodegradable, compostable fruit stickers around, but very few are actually certified as compostable and there is no way for a consumer to distinguish between them and dispose of them properly. Even more exciting is industry innovation towards a sticker-less coding strategy, in which produce peels are laser etched with their codes. We love this because not only is the solution inherently biodegradable, it also means we don't need to use materials for produce sticker facestock or release liners. At EcoEnclose we’re all about sustainable packaging, and fruit just happens to come “packaged” in compostable material already- just make sure you take the little sticker off first.