Hint: Look for mailers that are recyclable and compostable

If you are looking for the most eco-friendly mailer possible, you might be struggling to decide between recycled, recyclable, biodegradable, or compostable.

Here's a chart to help.

Bottom line? eCommerce packaging - and the vast majority of packaging - should be designed for recyclability first. Brands should avoid compostable packaging because it is a significant headache for composters focused on taking in as much food and yard waste as possible. However, if 100% compostable is critical to your brand, we strongly recommend that you choose a paper-based mailer such as our 100% Recycled EcoX Mailer, 100% Recycled Kraft Mailer, or 100% Recycled Apparel Mailer.

If the lowest carbon footprint is critical or you need plastic's functional benefits, choose a 100% Recycled Poly Mailer. Compostable poly mailers - even those made with bioplastic - do not address marine plastic pollution and carry many adverse side effects to the planet. 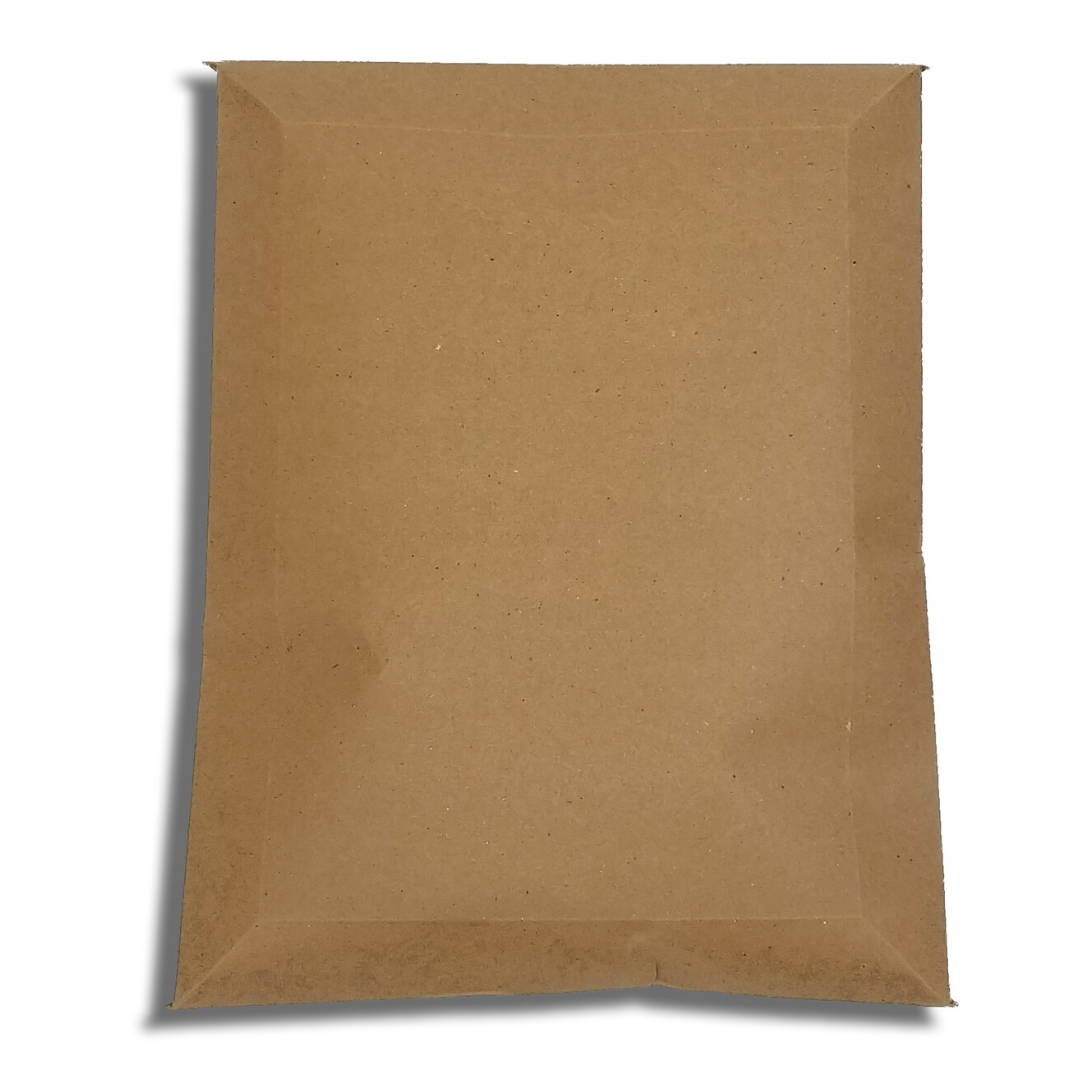 Renewable material that strengthens the land and soil when grown

EcoEnclose options are 100% Recycled, up to 97% Post-Consumer

Typically has a higher carbon footprint than film-based counterparts (more material is used, mailers are thicker and heavier). 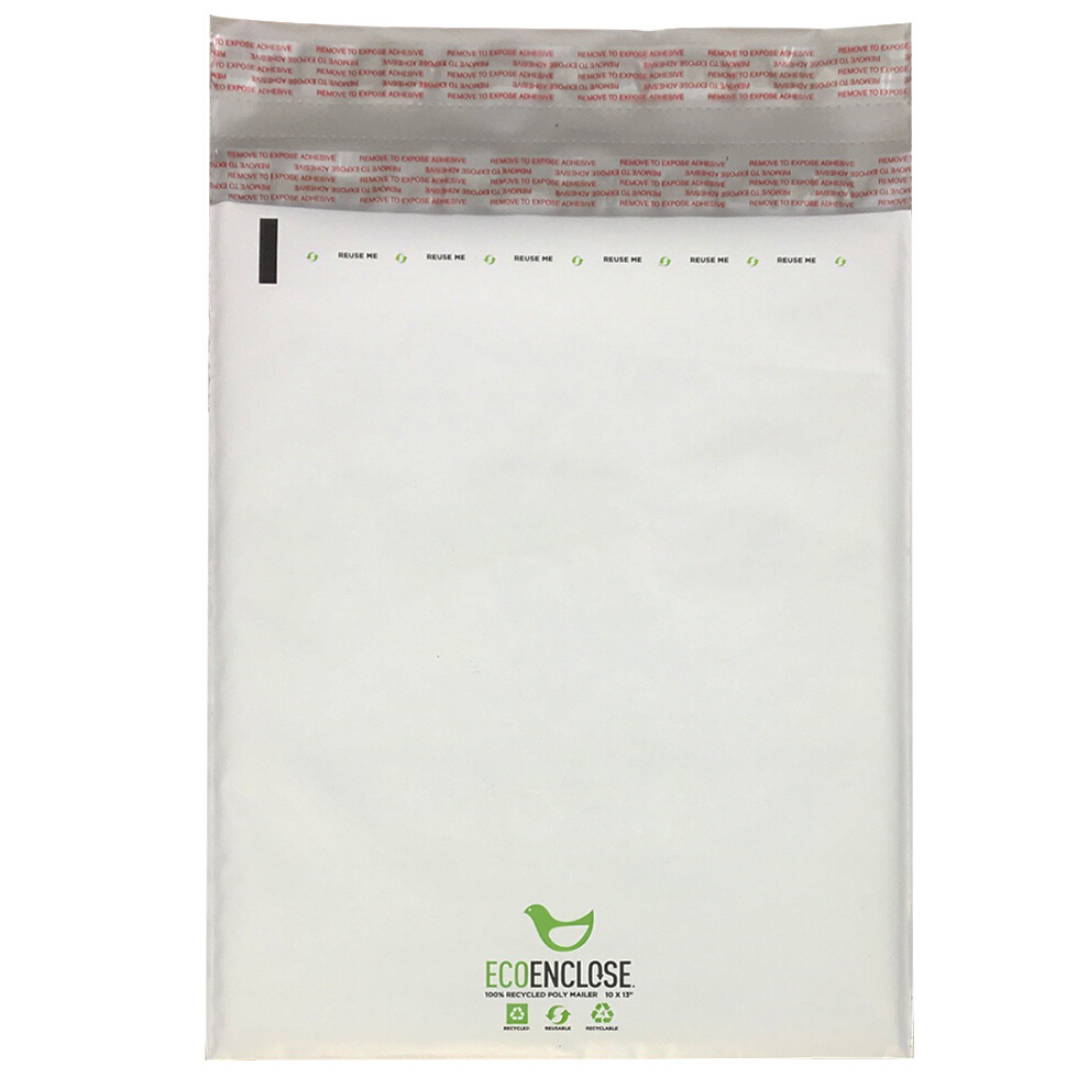 Recyclable in thin film bins (95% of Americans have ready access to drop offs). Potential to be recycled into poly bags, but main current market is into composite lumber.

Not landfill biodegradable (biodegradability is not desired in a landfill) 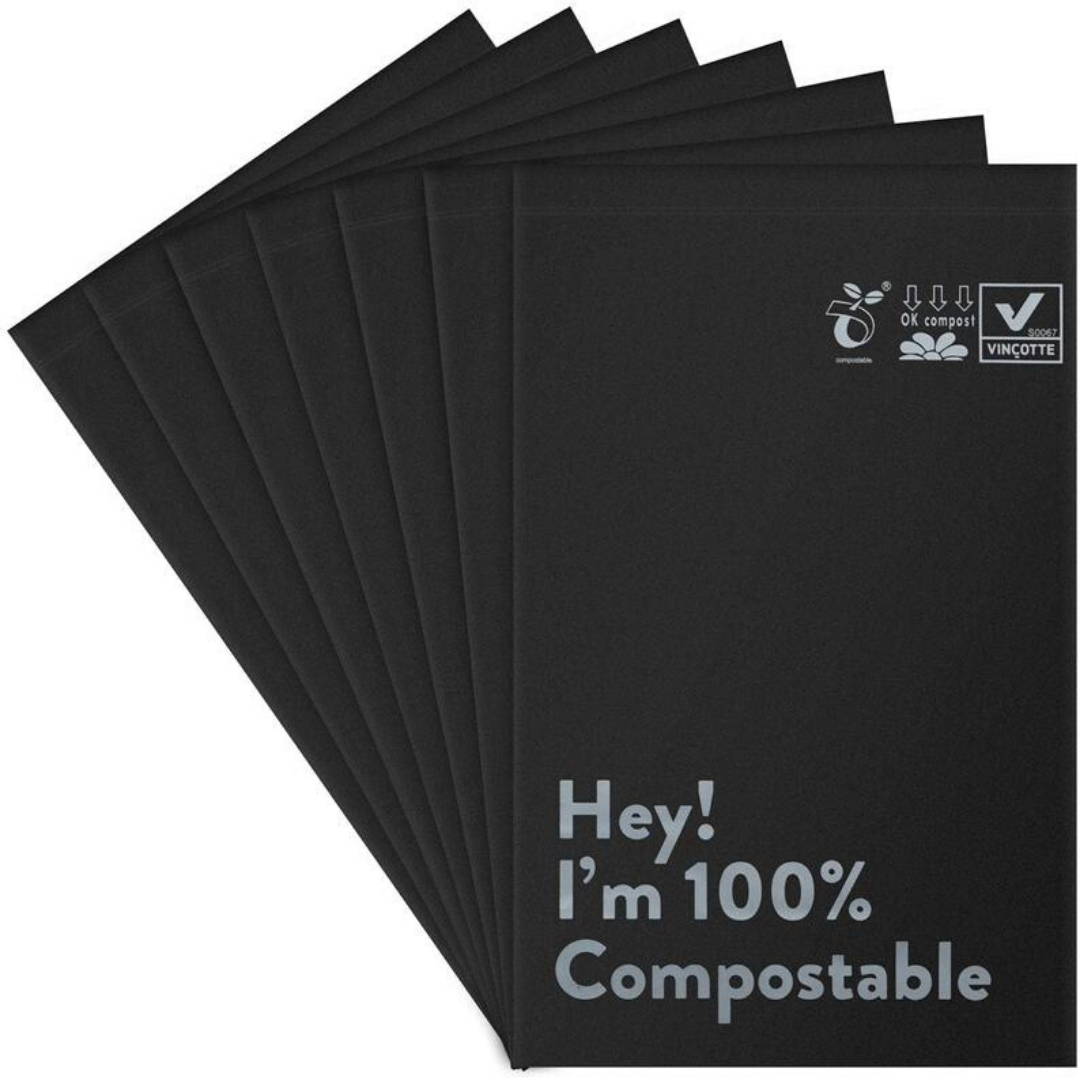 Made with a combination of non-renewable, petro based source material (PBAT) AND

Compostable in industrial and home bins (compostable poly mailers utilize polymer-based adhesives and ink that leave small contamination in soil, becoming problematic if these mailers end up as a norm)

Not proven to be marine biodegradable 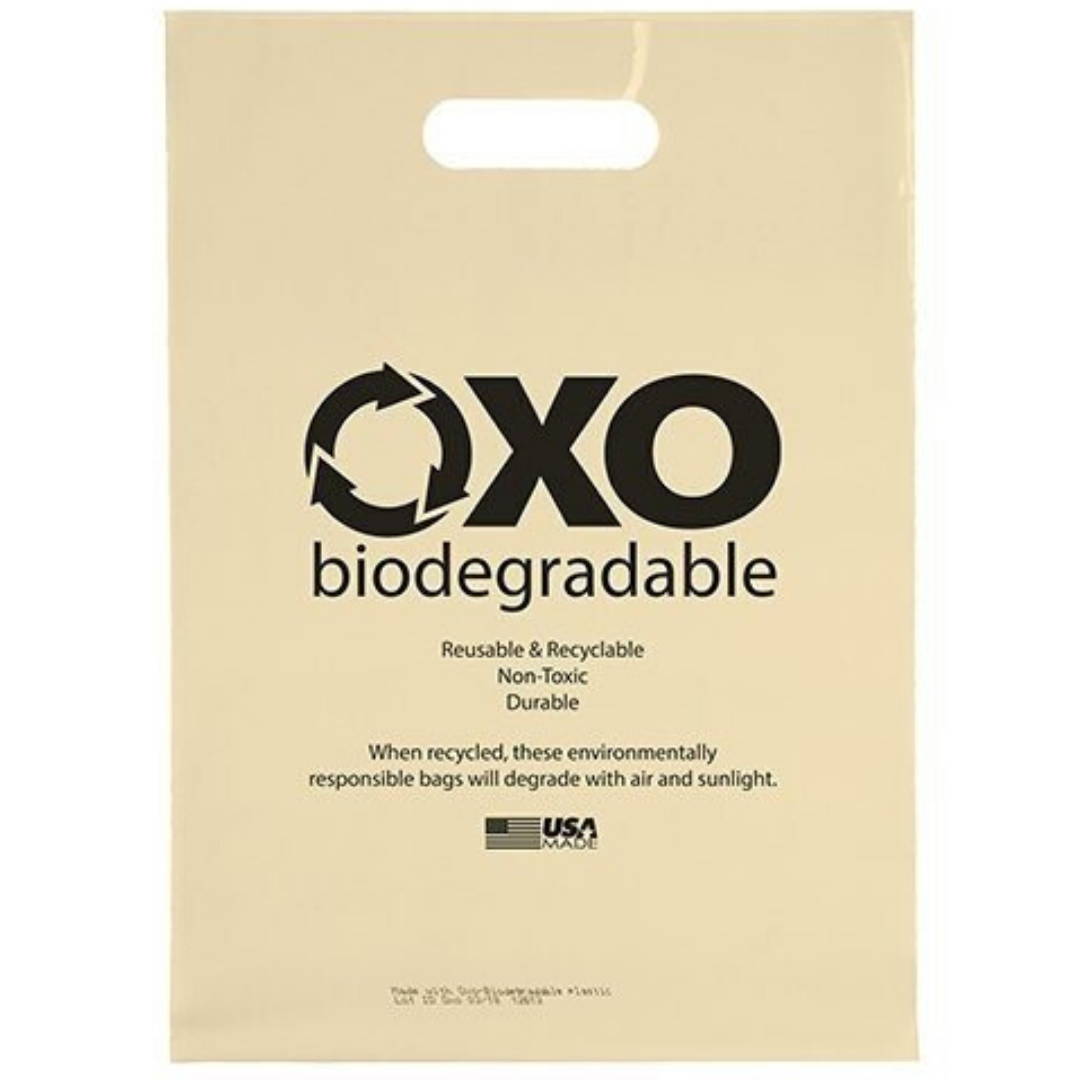 Non-recyclable (some claim to be recyclable, but film recyclers are weary of the additive that makes it oxo-biodegradable)

Why did you give corn a "Yellow" rating as source material for a poly mailer?  Corn is a terrible way to make plastic. Growing any crop, but especially GMO corn, for non-human consumption is a driver of so much environmental damage and many human rights issues worldwide.

Why did you give 100% compostable poly mailers a "Yellow" rating for being compostable?   For two main reasons.

First, we believe compost should not be viewed as a way to "get rid of things" so that we can feel better about the waste we are generating. The primary goal of turning organic waste into compost should be creating an end product - humus - that can be laid on top of lands to create richer, healthier, more biodiverse soil. That means ideally, composters would accept largely food and yard waste. Unfortunately, as we push our municipalities to start accepting more and more for composting, we are generating a final compost product that we really wouldn't want to lay onto soils to enrich it. Compostable poly mailers are just the type of item we don't really want in our compost. They offer no value to the soil once biodegraded, and their inks and adhesives bring trace contamination (which, in high volumes, would add up). Some composters are starting to ban different types of bioplastic because they struggle to process it and the materials are degrading the value of their output (which they need to sell in order to keep their operation afloat). We think compostable packaging should be saved for packaging of food and yard waste. Ecommerce packaging should be designed for recyclability.

Second, the majority of Americans still do not have access to compost, so they end up landfilling their mailer instead. Which brings us to our next question.

Why do items that biodegrade in the landfill bad get a "Red" rating?   Landfills are designed to keep anything from biodegrading but inevitably, things do break down, emitting methane gas. While some landfills capture this gas, many do not, causing it to be emitted into the atmosphere. This is why we should avoid sending biodegradable items to the landfill.

Why did you give 100% recyclable poly mailers a "Yellow" rating for being recyclable?   For two reasons.

Second, is the fact that recycling poly mailers is not as easy as we want it to be. Plastic film is not accepted in most curbside recycling programs because the flexible material can get caught in the sorting equipment at materials recovery facilities. While most Americans can easily access thin film recycling at a local grocery store, this is an inconvenient step, leading to low recycling rates.

Is plant-based / bioplastic / compostable plastic non-recyclable? Why can't I recycle it along with my other plastic film?

Because the chemical makeup of PLA/PBAT are so different from petroleum-based plastics (such as PET, LDPE, HDPE), this type of bio-film cannot be recycled in the same stream as traditional plastic film. Please do not recycle compostable poly mailers as they can be difficult for workers to separate out, and they go on to contaminate and degrade the quality of the final products being created with recycled plastic film. Managing this type of contamination can increase costs for reclaimers and remanufacturers and decrease their revenues, putting our ability to recycle these materials at risk.

As of this writing, no attempts have been made to try to recycle PLA/PBAT compostable film. Pure PLA (such as an EcoProducts beverage cup) can technically be recycled, but no dedicated streams and services exist for this material in the US.

It is interesting to note that some bioplastics are in fact recyclable. Coke's "Plant Bottle" is partially made with bio-based PET (derived from sugarcane). This bio PET looks (structurally) just like regular PET, making the bottle recyclable with all other Coke bottles. The bottle is not compostable.

What is oxo-biodegradable and why is it so bad?  “Oxo-degradable” or “oxo-biodegradable” plastics contain additives that expedite the plastic’s ability to fragment into smaller pieces, meaning that these materials rapidly break down into microplastics - which are the most worrying component of plastic pollution. The Sustainable Packaging Coalition has this informative position piece with their view on oxo-biodegradable and other enzymatic plastic additives.

Tell me more about the carbon footprint impact of these different mailers?  First, it is important to remember that scientists currently consider lowering carbon emissions to be the world's number one environmental priority and our only hope in reversing climate change. This can lead to difficult decisions as companies struggle to balance sustainability priorities (such as going plastic-free versus lowering carbon footprint). Calculating an exact carbon footprint (the greenhouse gas emissions created by the production, transportation and disposal of an item) is an in-depth and highly specific process that requires the use of a Life Cycle Analysis tool like Compass and asks for detailed information on where an item is produced, how it is produced, where it is shipped, how it is disposed, etc. Additionally, different LCA's account slightly differently. Because of this, it is not feasible to make blanket numeric statements comparing two broad categories of products. However, countless Life Cycle Analysis tools have shown a few things:

For anyone who prefers a slide show to reading long web pages...here's a summary of why we have not found PLA/PBAT compostable mailers to be an environmentally sound option for ecommerce packaging, and have decided not to offer this line as part of our product set.

We look forward to continued R&D in the field of bioplastics, with the hope that materials will emerge that offer the benefits of plastics, that are made with renewable source material that doesn't carry the massive environmental burdens of corn, and that are recyclable.

We know the landscape of packaging and bioplastics is ever evolving! If you have ideas on new compostable plastic materials or new research that runs counter to what we share here, we'd love to hear from you! Contact us at saloni@ecoenclose.com anytime.